The Navy Medal Of Honor

The Navy and Marine Corps’ Medal of Honor is our country’s oldest continuously awarded decoration presented for conspicuous gallantry and intrepidity at the risk of life, above and beyond the call of duty. 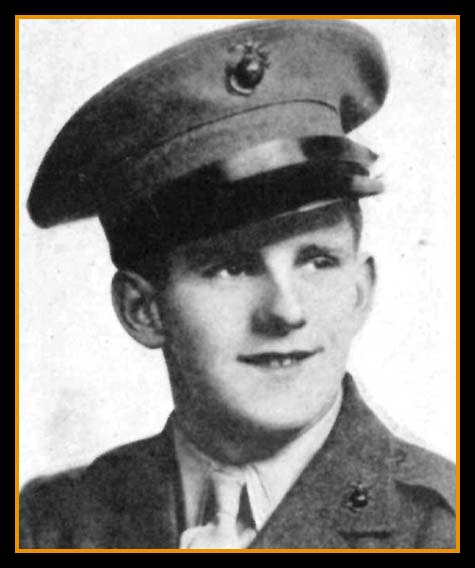 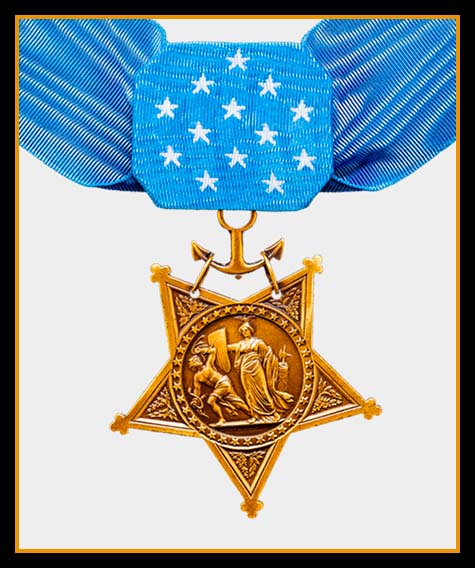 for service as set forth in the following CITATION:

For conspicuous gallantry and intrepidity at the risk of his life above and beyond the call of duty while serving as a Rifleman with Company I, Third Battalion, Twenty-sixth Marines, Fifth Marine Division, in action against enemy Japanese forces during the seizure of Iwo Jima in the Volcano Islands, 3 March 1945. Consistently aggressive, Private First Class Caddy boldly defied shattering Japanese machine-gun and small-arms fire to move forward with his platoon leader and another Marine during a determined advance of his company through an isolated sector and, gaining the comparative safety of a shell hole, took temporary cover with his comrades. Immediately pinned down by deadly sniper fire from a well-concealed position, he made several unsuccessful attempts to again move forward and then, joined by his platoon leader, engaged the enemy in a fierce exchange of hand grenades until a Japanese grenade fell in the shell hole. Fearlessly disregarding all personal danger, Private First Class Caddy instantly threw himself upon the deadly missile, absorbing the exploding charge in his own body and protecting the others from serious injury. Stouthearted and indomitable, he unhesitatingly yielded his own life that his fellow Marines might carry on the relentless battle against a fanatic enemy. His dauntless courage and valiant spirit of self-sacrifice in the face of certain death reflects the highest credit upon Private First Class Caddy and the United States Naval Service. He gallantly gave his life for his country. 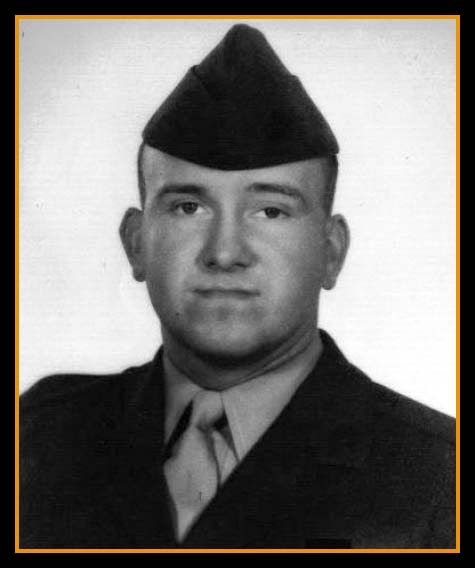 for service as set forth in the following CITATION:

For conspicuous gallantry and intrepidity at the risk of his life above and beyond the call of duty while serving as a Company Gunnery Sergeant during Operation MEADE RIVER in the Republic of Vietnam on the night of 8 December 1968. Informed that the commander of the lead platoon had been mortally wounded when his unit was pinned down by a heavy volume of enemy fire, Staff Sergeant Taylor along with another Marine, crawled forward to the beleaguered unit through a hail of hostile fire, shouted encouragement and instructions to the men, and deployed them to covered positions. With his companion, he then repeatedly maneuvered across an open area to rescue those Marines who were too seriously wounded to move by themselves. Upon learning that there were still other seriously wounded men lying in another open area, in proximity to an enemy machine gun position, Staff Sergeant Taylor, accompanied by four comrades, led his men forward across the fire-swept terrain in an attempt to rescue the Marines. When his group was halted by devastating fire, he directed his companion to return to the company command post; where-upon he took his grenade launcher and, in full view of the enemy, charged across the open rice paddy toward the machine gun position, firing his weapon as he ran. Although wounded several times, he succeeded in reaching the machine gun bunker and silencing the fire from that sector, moments before he was mortally wounded. Directly instrumental in saving the lives of several of his fellow Marines, Staff Sergeant Taylor, by his indomitable courage, inspiring leadership, and selfless dedication, upheld the highest traditions of the Marine Corps and the United States Naval Service.